Diving into navi as an interactive command builder, and using strace as a demo for concise cheat sheet!

In the previous post I spent a short time detailing steps I take to make my command line experience more pleasant and efficient. One of the steps I listed was using the tool navi to quickly recall commands.

This is incredibly helpful for commands that I don't use often, or for variations of commands with specific options that I use less frequently. I find fuzzy searching through my navi cheats is 100x faster than grepping through Manpages or --help output. Now, of course there are times where my navi cheats don't cover something I need and I must fall back to older methods, but then I just update my cheats and go about my day.

I recently found a new (to me) way to use navi, as a "command builder" of sorts. It makes sense to use on commands where the flags/options are additive, and not individual commands (which is somewhat of a pet peeve of mine...)

Future Kevin Says
I should make a post on CLI UX about why certain CLI patterns are sub-optimal...
¯\(°_o)/¯

A good example is strace, which allows one to display system calls made by particular commands and processes. Several other blog posts have recently mentioned strace, and it's a tool that has come in hand for me more than a couple times so in it's honor it'll be the demo today.

We won't be adding all the options that strace has, but the ones I find most common to my use cases, which probably covers a pretty vast swath of people as well.

Our goal is to build a navi cheat sheet that walks us through building an strace command with all the options we want to expose.

This post won't cover all the details of strace or even what all the options mean, although most of the ones we're adding are pretty self explanatory.

For a pretty good summary, see "strace The Sysadmins Microscope".

As mentioned in my previous post, I bind navi to <CTRL>-n in my terminal, using the following ZSH function in my ~/.zshrc:

The post important parts are the --path argument, which tells navi to look in a specific location for cheat sheets (I prefer to use my own directories, instead of the built in ones and "adding repos" feature). You can add multiple directories separated via : (and technically I have a few directories, including a $work one that I pulled out of the example above).

The path listed above is the cheats/ directory of my public repository. It's just a big list of .cheat files. More on that soon.

Also the --print flag tells navi to simply print the final command, instead of running it. This is useful because often I want to make some additional edits to the command that either my cheat sheet didn't account for, or the features simply don't exist to add the flexibility I wanted.

Normally, --print would just print the command to stdout, however with ZSH you can have the current command line replaced by the output of a command, which is what is happening the remainder of the function.

What is a .cheat file?

navi looks for files ending in .cheat with a particular structure. I won't re-hash the entire tutorial from the navi repository since it's quite good and comprehensive, but the TL;DR is:

So a typical .cheat file follows this kind of a pattern:

Again, a single .cheat file can have multiple % categories, splitting up the expansions, to allow you to re-use variable names with different concrete expansions. Although, I normally only have a single % per file.

This is where the true power of navi comes in to play. By default, navi presents a blank fzf text box for variables without an expansion line. Such as the <qux> variable above.

So let's first build out our first strace .cheat file:

Running navi, and typing something in the fuzzy match area to select our strace command then brings up a new screen asking us to fill in the CMD variable (since we did not provide an expansion). If we type firefox, navi drops us back to the terminal with the following command ready to run:

We can present a limited set of options for the user (which by default also allows them to type something outside of our presented options).

So if we instead add the following line below our command template, we'll get a list of two options.

NOTE: the user can still type something outside of our two options, although we can prevent this behavior which we'll see in a minute.

Since fzf by default delimits options via a newline \n, we can actually make the expansion a little more readable using spaces, since the values themselves don't have any spaces.

This is functionally equivalent to what we had before, but some prefer it. It also points out that expansions can use standard pipes |.

Let's add a new command (with description) to our file:

Now we can type out a PID we wish to attach strace to.

But there is a problem; since we didn't provide an expansion, it's up to us to type in a valid PID. For example, typing foo just blindly makes our command line:

Which will error when run.

Using a static expansion can help with this somewhat:

NOTE: on 64bit systems PID_MAX_LIMIT is around 4 million...but for simplicity and demo sake we'll make it the 32bit limit since we'll be changing it shortly anyways.

Which is better, we'll get a huge list of numbers (that we can fuzzy match through). And we'll be dropped on the command line with a PID:

But we still have the problem of someone can just type foo and again we're in invalid territory.

navi provides a delimiter we can use on the variable expansions --- to provide additional context navi either about the selection itself, or presentation of the options. One such option is --prevent-extra which limits the user to list of options you provided, and nothing more.

NOTE: --prevent-extra is listed as experimental. And when user provides something outside the presented list, navi exits with an error. I'm on the fence about if that's better or not. But it's an option no less.

Changing our expansion to the following solves the invalid issue we had before:

That crazy list of PIDs with no context isn't a ton of help either. Luckily navi can come up with options dynamically!

So instead of just providing 32,000 numbers in sequence, with no process names, or even knowing if its a valid PID of a current process we can just ask navi to look at the currently running processes via standard shell commands and present those to the user.

But we have a slight problem, something like ps -aux prints out far more information than we need. We need a PID and a name, more or less.

Since navi expansions are just shell pipes, we can use standard utilities like grep and awk to fix that!

We leave the --prevent-extra because we're still limited on if the PID isn't present in this list, well its not valid.

Now we get a nice fuzzy match-able list of PIDs and the associated processes!

However, running this shows one more issue...we get the whole selection on our command line:

NOTE: the extra spaces in there come from our expansion option too!

navi options to the rescue again! There is a --column option which allows us to use only a single column of output as the final selection!

Changing our expansion to:

Gives us the correct output.

Ok, so we can now build an strace command, fuzzy match through a valid list of processes running on our computer, but strace provides all kinds of additional options for us. For example, what we want to suppress attach/detach messages (i.e. -q), or it's variations (-qq or -qqq)?

Turns out, we can use expansions for that too!

Changing our command template slightly, to add a placeholder for the -q|-qq|-qqq:

We can then add another expansion this variable:

We're just building off what we already know. Splitting options into two columns with the flag we want to add on the left, and description on the right, separating all options with ; which we can replace with a newline via tr, then telling navi to only use the first column as the actual selected output for the expansion.

Now we get a new screen asking us if we want to suppress messages or not, with the associated option on the left!

PRO TIP: It's a good idea to place the "none" or "no" option that represents no additional flags first, as the user can then just fly through pressing <enter> when they don't wish to add anything additional. This greatly helps when there are a bunch of optional flags.

One final nicety I like to add is the --header option, which allows one to give a short text describing what the user is actually selecting. This comes in handy sometimes when the choices aren't super explanatory.

So our final expansion version becomes:

This shows a text message above the input box with description of what navi is asking.

We can continue fleshing out the options repeating the above steps for the flags we want to present.

Now that we'll have more expansions, you'll notice that in the upper section of the navi window, there is a preview of what expansions have been expanded to thus var. This comes in handy at times. 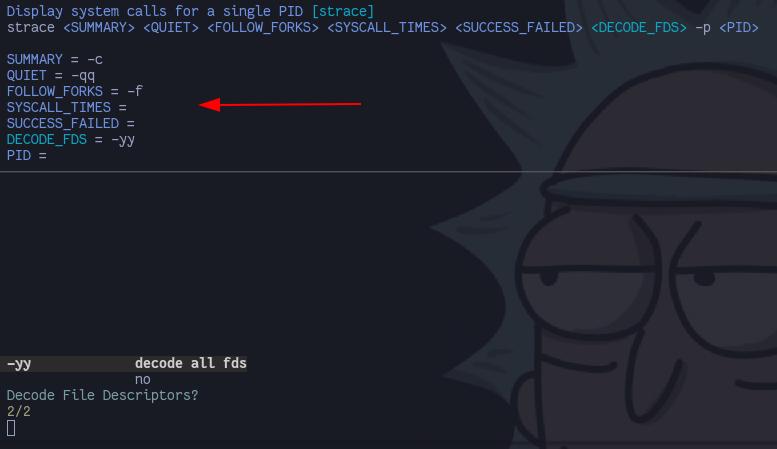 This brings us to one of the limitations of navi (thus far), in that it's difficult to see if a previous variable has been expanded into something or another. There is variable dependencies but those don't quite do what I want.

A good example is the next (and probably most important) option for strace and that is the filtering.

For example, so see all syscalls related to processes (such as execve(2) for when a process is created), you could use:

The -e option takes expressions in the form of option=value. There are quite a few predefined options, as well as values, groups, etc.

The way navi works now, you can't for example ask, "Do you want to add an expression" and insert -e foo=bar or nothing if they answer no. So we end up with two different command templates, one with expressions and one without.

Additionally, navi is limited to a single expression, you can't for example loop and provide multiple expressions. navi does provide a --multi option which allows FZF to pick multiple options from the list (i.e. imagine multiple firewall ports), but not multiple pairs in the syntax strace expects. This is normally fine, as you can always add additional expressions after navi is finished, and many times a single expression is all you want anyways.

To get a better sense of this, we'll add two more command templates, adding expressions, and navi provided lists for the options and values pairs:

Now we can interactively build a full strace command!

We want to allow the user to type something outside our list, because strace supports a bunch more options, and regex, or ! not expressions, etc. However, navi doesn't have a full way to express those options so we're limited.

But this is still leaps and bounds better than nothing!

Hopefully, this has shown how having a command builder can be a huge help. Yes...it is work to make the cheat sheets, however there are plenty out there ripe for copying. navi also has built in functionality to add public git repos as cheat repositories, and have them automatically updated. I prefer to use my own and have more control over them, but that option exists for those that want to bootstrap making their own cheats.

There is quite a bit more navi can do, but this post is long enough!